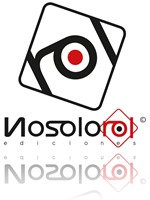 Well, at last I can announce it. It’s been coming a few weeks now and I haven’t said anything because… well because it could have gone in a different direction, but it hasn’t and I’m happy and very excited.

We have associated with Nosolorol Ediciones in Spain to help spread the wealth of Spanish games into the English speaking  market, and help identify exceptional roleplaying games to bring into the Spanish market.

Nosolorol has been a driving force in the RPG scene in Spain for many years and their catalogue of games is nothing sort of impressive.

With titles that cater for the youngest of players like Pequenyos Detectives de Monstruos en la Oscuridad (Little Dectives of Monsters in the Dark) and La Torre de Rudecindus (Rudecindus’ Tower) to adult titles like Cultos Innombrables (Unnameable Cults) o Fragmentos: Director’s Cuts and the rather magnificent Aquelarre, the company has a very extensive catalogue that will fit pretty much any area of the market.

On the other side, G*M*S Iberia will evaluate roleplaying games that will fit into the Spanish market to propose new partnership between the two companies.

We will aim to break the language barrier between the two companies as well as help throughout the licensing process and ensure communication is maintained smoothly until production is in place. With this, we aim to help make sure everything happens as quickly as possible with the maximum amount of transparency.

G*M*S Iberia remains an independent entity but will concentrate mainly on Nosolorol as a partner for its quality and variety of games that we can guarantee to satisfy the standard we would like to satisfy.

We now welcome pitches for games if you are interested in publishing your game into Spanish territory, and welcome enquires from publishers to publish Nosolorol games.