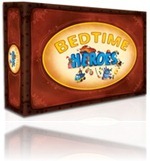 Although children can get jolly scared when they have a nightmare, more often than not they fight their monsters in their dreams with the help of their favourite toys. Or that is what Bedtime Heroes would want us to do.

In this light and simple game, the players are put in the place of children who fall asleep and are given a choice of monsters to fight and defeat in their dreams to stay asleep.

Before I go any further I will issue a disclaimer here. The version of the game I got to play was a prototype that was sent to me before the Kickstarter campaign started and it wasn’t the final version of the game. The rules were still being tweaked and the artwork, although define it its style, wasn’t complete either. Therefore my impressions might end up being very different once the game is finalised.

At the time of writing this review, the game components are three decks of cards, a set of dice with coloured dots and some chocolate gold coins. Yeah… for real. 🙂

Each player has a card with the illustration of a child. On the one side the cards show the child asleep and on the other side they’re awake. While the children are asleep they can fight the monsters. If they can’t defeat the monsters, then they wake up and the turn ends until they fall asleep again.

One of the actions the players can perform during every round is fighting the monsters which is done by rolling a number of dice. If the right combination of colours come out as result of the roll, then the monster is defeated. If the monster is not defeated the child wakes up.

Every time a monster is defeated, gold coins are awarded, which, as another action can be used to buy items that will help with dice rerolls and other aids.

And lastly another action is to go back to sleep.

The game ends when the deck of monsters has been depleted.

Play wise the game is super light. Although the presence of toys adds a bit of variety and strategy to the game, there’s no doubt the ones to enjoy it the most will be children of 7 to 10 years of age and adults will probably get bored with the “rinse/repeat” nature of the mechanics.

Overall the game has a massive potential for development that could (and probably will) be met by the time is published, so I look forward to seeing the evolution of a game that could keep children entertained for hours on end.