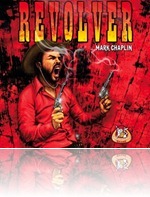 I know I’m late in reviewing this, but nobody has ever really talked much about this one, so here I am, a year after first playing it, talking about it. Let’s just get one thing straight: I really don’t like very many card games. I’m a board gamer, and these deck building games, trick taking games, and other card-based games just don’t do it for me, by and large. Some card games can transcend their disability (read: being a card game) with me because they’re not quite card games, really, such as Summoner Wars or Trick or Treat, and it’s that way because they’re not really card games as much as a poor man’s board game because the cards are really more like flat, rectangular units or locations.

Well, when “Dangerous” Dave Roswell, a dear friend I met at Fortress: Ameritrash, turned me onto it, my first thought was, “Crap. Another card game I won’t like.” It turns out that not only is the game very good, it’s so much different than many of the card games that I’ve played, both in style and play, that it might actually be one of the best card games I’ve ever played. It is so good, in fact, that I just bought a second copy to replace the one I got from Dave and subsequently loaned to my friend Chris, knowing I’d probably never ask for it back. Only a very solid game would cause me to own it not once, but twice, especially when it’s a card game in one of those abhorrent tins that doesn’t seem to fit well on a shelf full of games.

Revolver, from Stronghold Games, has an “American Wild West” theme which is both very different than the usual fare (read: not zombies or generic fantasy tropes) and truly exudes a Wild West feel. Being a two-player game, it pits the good guy”Colonel” player and his posse against the “Outlaw” player in a game that’s part battle and part racing against the clock. There’s several cards in the tin which represent locations and have a sort of timer mechanism printed on them. These represent the battlefields which the two players will battle over for around four turns, until the time runs out and you move to the next. You simply place cards with icons on them on your side of the battlefield, the other player does the same, and then you see who has more hits. If the good guys do, the bad guys lose one of their gang members, but if the bad guys do, they get one step closer to escaping across the Mexican Border.

It’s a very simple game, mechanically, but there’s a lot of strategy that goes into it because many cards cause special effects to happen which bolster your side’s ability to make war upon the other. Some allow you to play extra cards, some block the opponent’s ability to place cards on a battlefield, some give you auto-kills of the bad guys, and a whole lot more. I was kind of surprised how much I liked the game, and it has a very different feel to it. It almost feels like a John Clowdus game in some ways (which is a good thing), but without the multiple-purpose cards. The best part is that it only takes maybe 30 minutes or so to play, and setup only takes about 3 minutes, if that. I’ve brought my wee tin all over the place, and I’ve played it with friends and the wife over dinner at restaurants, at the park while the kids attempted to shatter all the bones in their bodies on the jungle gym, and so on.

From a value perspective, I think it’s a pretty slick deal because at around $20.00, it will provide you with a whole lot of fun. I’ve probably played it 10 times at this point, and I’m still all about playing it again. Carp, the kids are at their aunt’s house for the next couple of weeks, so me and the missus are going to be all over this at night when we’re about half in the bag thanks to Mr. Tanqueray and Stella Artois. It’s also worth mentioning tha 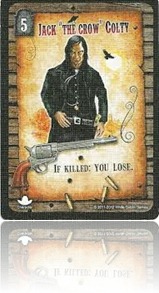 t the art is actually pretty damned good, and the components are top quality, with well painted wooden blocks, thick cards, and great little punch-board tokens. There’s a handful of cheap expansions as well, two of which Fortress: Ameritrash’s Josh Look was kind enough to sell me on the cheap. I’ve not played them yet, but the first expansion changes the core rules a little, such as being able to set ambushes for the bad guys by placing cards underneath a battlefield, and the second expansion adds a new Prison location from which the bad guy player can free his defeated cronies.

As I said, it’s a good game that I, my wife, my 12 year old, and several of the Circus Freaks have enjoyed. Not a single person said anything untoward about it, although it was rated a little lower than I’d have expected when I polled them all. If I had to name just one flaw with the game, I don’t think I really could, to be honest, if we’re talking the game itself. Now, I hate those little tins that come with this, Panic Station, and the original edition of Quarriors. They never fit anywhere right, and the art isn’t nearly good enough to be a little display piece. Other than that, though, the game is solid, really fun, fast, and portable. I think, since I’ve been thinking about this game for an hour or so now, that I’m going to get the wife out of bed right now, set this up, and whip her ass at it. Or try, at least.

Why My Heroes Have Always Been Cowboys:

Why This Bronco Needs To Be Put Down:

Overall:
Revolver, with its unique Western theme, fast play, portability, and price make this a game that is very good, although probably not great, and that is simple to learn, teach, and play. While it is the epitome of a filler game, I don’t think that’s necessarily a bad thing because it’s not expensive and is so accessible that you can literally teach it in just a few minutes at best. We highly recommend it if you like quick-playing card games that don’t involve set collection or trick taking.