This is is why Critical Role Jokes angered people. 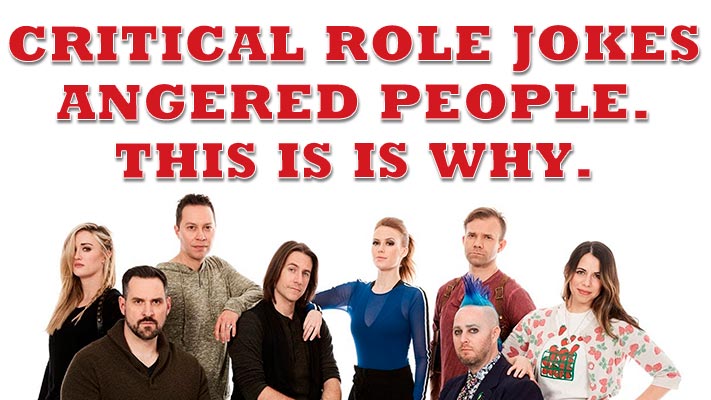 Critical Role keeps being the most-watched and best-loved TTRPG YouTube shows. And, sometimes, when they make a joke, they upset people. In this video, I explain why.

Please help our channel by subscribing and commenting and support our Patreon Campaign if you can: https://www.patreon.com/gmsmagazine

It might seem like something harmless when someone makes a joke about mental health status or being in a hospital. But the fact is it can be very hurtful for people who are afflicted by those situations. When a show like Critical Role, that has a lot of pull on the hobby and where it’s going, makes a mistake, people go up in arms. And the more popular they become, the more people will complain when they mess it up. And this is unavoidable! Hope you enjoy the show!

Hello everyone and welcome to the GMS Magazine YouTube channel. I am Paco García, your host and, yes, this is the quarantine setup, since I am staying at home rather than recording from my studio. I hope you are also keeping safe. In this episode, I wanted to talk to you about the recent controversy with Critical Role. If you want a transcript of this video, you can find it on our website.

A few days ago Critical Role aired a video in which they made a few jokes that have drawn some stern criticism to them from a fairly large number of fans.

Disclaimer: This video has not been recorded to give Critical Role a bollocking or go on a rant about what a horrible bunch of people they are who always get everything wrong.

I think everyone makes mistakes, despite our best intentions. I made a mistake recently when I released one of my videos about people with impairments around the table and as characters when I didn’t talk to anyone affected by the issues I wanted to talk about. In my enthusiasm to record and bring out something that I hoped would bring some food for thought, I ignored the experiences of the people I wanted to help.
And that is OK. I listened and I will do better in the future. Or at least try.

In this situation, I believe Critical Role have messed up and I think they must do better in the future, but I make no apologies in cutting them a lot of slack because I feel what they do for the hobby is overall good but they have a few increasingly poignant corners they should be ironing.

It simply means I will keep watching and keeping an eye on them whereas with other people I would already turn my back on them.

This video is aimed at those who are angry at the people who have become upset with Critical Role or don’t understand why they are so angry at them.

This video is aimed at people who think those complaining are just outraged at everything and are looking for an excuse to be offended.

Let me assure you, it is not the case.

People are upset because Critical Role made a joke about something that is very real, very present and very hurtful.

This is what Critical Role said:

Or other information that may be mentioned by any of our Critical Role Family, especially Sam Riegel. Please consult your local Wizard if symptoms progress into all-out mania, as the only solution might be a wish spell.

If your insurance does not cover a Wish Spell, simple straight jacket and padded cell will suffice.

While in said padded cell, learn a new skill! Like bread baking.

So what is all a joke for you, it is very, very real for them.
And that hurts. That hurts a lot.

Furthermore, they go on to make light – make fun even – of being hospitalised and, to rub salt into the wound, in a psychiatric unit.

Again, something that I hope most people have not experienced, but those who have can have a lot of trauma. And seeing something like that as a joke in a show you enjoy is not cool.
You might be able to take it. It might mean nothing to do.

But it means something to a lot of people. And please don’t tell me there isn’t anything that people could mock that wouldn’t make you angry when they mock it. Or when they insult it.

We all have something. Everyone. If you are saying you don’t, you are not being honest. Sorry to be blunt.

And they have every right to complain about it. Just as you do when someone mocks something that affects you or that you hold dear.

So when you see someone who seems irate or outraged about something you are not affected by, it is worth considering that our experiences are not universal. That something that upset us might not upset anyone else. But that doesn’t make those things any less upsetting.

And we don’t need to intervene. We cal let people have their angry moments. Their rants in twitter, FB or anywhere else.
We can let them scream as much as they like.

And we don’t have to say anything, even though you can.

We don’t need to put them down.

We don’t need to tell them they should not play if they can’t take it.

We don’t need to tell them they should not be a part of our community if they can’t take a joke.

We don’t need to understand them.

We just need to let them say what they want to say.

Whether we like it or not, the only people who can do anything about it are the Critical Role crew. They are the only ones who can decide if they are going to make another joke like it.

We often claim how inclusive RPGs are. We many, many times hear about how social we geeks are. How much RPGs can teach us about being social people and interpersonal skills?

How about we take from RPGs to let others dislike something?

Why don’t we just accept that people will be upset about things and that that is OK?

That no matter how angry people are at things, that doesn’t stop us enjoying them and playing however we want?

Why don’t we learn that shutting other people up doesn’t do anyone any good? Because people won’t shut up and it will show that we are not as social as we claim to be. Whether we like or not.

But do so in the knowledge that the ones looking intolerant and outraged is you, not those complaining. Because it is you who are upset at someone else being upset.

And that, my friends, is just sad. At many, many levels.

For our main channel: http://bit.ly/GMSmagazine

Podcast Episode – The RPG Room: So you want to be a freelance?