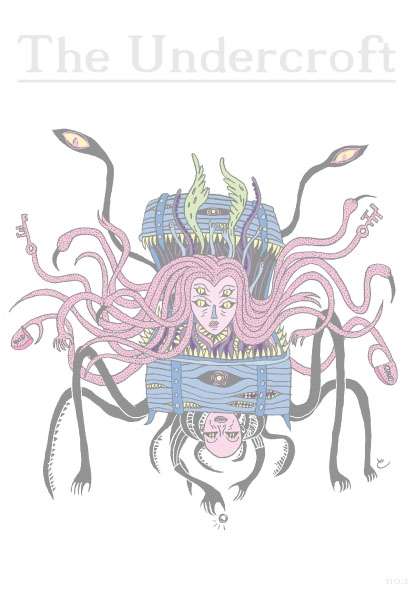 The Undercroft 2 clocks in at 21 pages (laid out in 6’’ by 9’’/A5) if you disregard front cover, editorial, etc. I own the print copy, which is stitch-bound, well-made little booklet as far as ‘zines are concerned.

Anyhow, important to know: While nominally, the content herein is designed for use with the LotFP (Lamentations of the Flame Princess) system, the majority of the articles contained within are not only pretty rules-lite, they actually can be applied rather easily to other systems – to the point where I’d consider this to be almost system neutral. So yeah, if you’re playing 5e or PFRPG or the like, it’ll be easy to adapt the materials within.

Okay, that out of the way, it should be noted that this ‘zine’s installment is devoted to HORROR.  Not dark fantasy, not “kinda creepy let’s kill undead”, but frickin’ horror. While it also features components that are strange, the ‘zine is actually effective in what it does, so reader discretion is advised.

The most “normal” article within this booklet was penned by Tony A. Thompson, and is situated smack in the middle of the ‘zine: On a two page spread with the artwork, cleverly situated in the middle of the page, making smart use of the binding chosen. The article contains 12 different potions, suitable to teach PCs not to drink any weird liquid they find – there would, for example, be one that makes the characters’ toes fall off, to be replaced by tiny hooves. Severe disorientation, blindness, smelling breath, flesh oozing from the mouth – some seriously nasty effects here, and it should be noted that these make for interesting complications/side-effects as well. Overall, the rules-component is almost non-existent here, which may be a plus or downside, depending on where you’re coming from.

The ‘zine also contains three different monsters, illustrated by Matthew Adams in a stark and intriguing style that captures ScrapPrincess frenetic energy while being more concrete and defined – I really enjoyed his art style and wished we got to see more of it. The creatures are, for example, the nightmare fodder storkman, whose long legs stride through mist that sedate the legs of those caught in it – while they steal babies to place them at the threshold of other households for an inscrutable agenda. Briar witches haunt old ruins, and each word uttered in her vicinity will cause damage – and strengthen her. These witches can cause the growth of briars and brambles, and emit screams by spending hit points they absorbed.  The artwork seems to show her with a rose in her mouth, which made me shudder. Finally, the snailing is a man with a snail’s shell on the back – transformed by their miserly nature into obsessive and dangerous collectors. All of these don’t have stats, but their concepts speak for themselves.

Daniel Sell’s “The Visitor”, also illustrated by Matthew Adamas, does come with stats – the entity is a weird, preternaturally quiet supernatural serial killer who enjoys invading homes and paralyzing targets, arranging them in grisly tableaus, mummifying its victims. Seriously twisted! Less horrific: Tobis. That’s short for Transplasmic Organic Bifurious Inductors, these entities can help stabilize magic and represent essentially a kind of unique homunculus that comes with special variants that have their own rules as well. Nice.

Speaking of which: Simon Forster contributes a brief short story, “Blood”, which, while slightly experimental, was a great read! Kudos! Simon Forster also presents the little scenario herein, which ties in with another article.

In order to talk about the brief module (which could jumpstart a whole campaign), we need to go into SPOILERS. Potential players should jump ahead to the conclusion.

All right, only referees around? A perfectly circular pool somewhere in the wild contains a massive ring at the bottom – once the curious adventurers pull it, the water willd rain into the sealed wizard’s laboratory/cave complex hidden beneath – and the water will erase the binding of That Which Slips Between. And this alone is worth getting this ‘zine if you even remotely like horror. Seriously. This entity gets its very own article, penned by Luke Gearing.

It is inspired. You see, the entity is essentially a nigh-unstoppable, strange force. To quote the start of the article: “It moves towards you. Its gait leisurely. Each step It takes moves too far towards you, the distance seeming to warp with every step. A nightmarish child-drawing of a human figure – a jumble of lines masquerading as a man, a stick figure given malignant life and purpose…” The entity comes with stats, but it can’t be harmed, it can’t be slain – I can just be contained. Its actions are not guided by mortal sense or dramaturgy – there is a generator to determine its actions, with 20 different entries, random directions and some rumors provided. These tables are GOLD. One of the things that makes the hounds of Tindalos and similar entities like Slenderman work so well, is that they seem to adhere to inscrutable rules – this is the case here. For example, the entity might move to the lowest depression within a 500 foot radius, then kill anything in that depression. It will kill anything that moves into the depression. After finishing its work, it will stand perfectly still for 6 minutes and 34 second. Time and its rules imposed on the creature, observing, roleplaying, is the only way to have a chance to deal with this utterly horrific…THING. It is genius, amazing and thoroughly glorious. It is genuinely SCARY.

Editing and formatting are very good on a formal and rules-language level, where applicable. Layout adheres to a one-column b/w-standard, and as noted, the artworks featured within, particularly for the monsters, are awesome. The adventure-site gets a nice piece of b/w-cartography, but no untagged player-friendly version.

Daniel Sell, Simon Forster, Matthew Adams, Tony A. Thompson and Luke Gearing have created a humble little ‘zine that made me redefine what I can dare to hope from regarding ‘zines. This supplement is literally all killer, no filler and That Which Slips Between alone warrants getting this supplement. If you even remotely like horror, get this. The entity is so cool, I’m tempted to use it in pretty much all systems GUMSHOE, CoC, etc. – the monstrosity is just brilliant, and I’d pay serious bucks for a whole book of entities of this caliber. All in all, an excellent ‘zine for horror-fans, well worth 5 stars + seal of approval and my “Best of”-tag. Highly recommended!!

The Master of Forms Expanded – The Wood Element is available from DriveThruRPG.

The Clockwork Wonders of Brandlehill