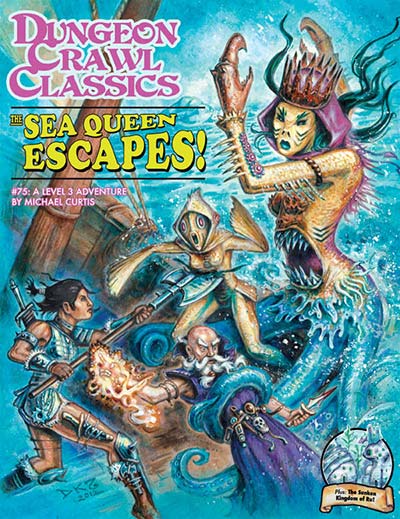 The Sea Queen Escapes clocks in at 28 pages, 1 page front cover, 1 page editorial, 1 page advertisement 1 page back cover, leaving us with 24 pages of content, so let’s take a look!

The Sea Queen Escapes was designed for 6 third level characters, with the suggestion, as always, of a well-rounded party as an ideal means to tackle this one. Fighters will particularly appreciate the numerous occasions where they may execute special, environment-specific mighty deeds of arms – at least I did. As always with Goodman Games’ DCC-modules, we do receive pretty darn impressive b/w-maps, but alas, as always, we do not get player-friendly iterations of the respective maps. On the plus-side, two massive one-page handouts that you can give your players does make up a bit for this shortcoming.

As always, we do receive well-written read-aloud prose to set the stage for each room.

All right, and this is as far as I can go without diving into SPOILERS. Potential players should jump ahead to the conclusion.

All right, only judges around? Great, so first thing: Never show the cover and title to the players – the combination of cover and title are actually a big SPOILER, and can really wreck one of the key-scenes of the adventure.

Second thing: Even though The Sea Queen Escapes has a serious marine/water-theme, it actually isn’t focused on underwater adventuring, so if that’s what you’re looking for, you won’t find it here. (As a plus: Unlike the horrible “Shadow under Devil’s Reef”, it tackles water and the chances to drown with rules that make sense and are fun, so that’s a plus, even if it’s not the core component of the adventure.

Now, the damsel in distress is nowadays a cliché, to the point where the subversion of the cliché has become its own cliché, which, arguably, these days is seen more often than the original angle. The primary hook of The Sea Queen Escapes is just that – the PCs manage to get their hands on a magical token, and are thereafter sent strange dream-missives from a gorgeous queen beneath the waves, imprisoned by a vile wizard, who beseeches them to free her. Interesting here: In contrast to many other systems, DCC actually does have its share of “rescue lady”-angles that have not been perverted/inverted, and as such, paired with DCC’s patron-engine powered propensity for spellcasters to be (even more) corrupt (than usual), the angle, if sold properly to the PCs, may actually work, when in mainstream D&D-iterations, the Ackbar-memes wouldn’t stop – ever.

The Sea Queen Escapes pits the PCs against the defensive measures left by the grand sea-wizard Shadankin, who mysteriously vanished ages ago. Cealheewhalool, the sea queen in question, directs the PCs towards the first of the small dungeons herein – Shadankin’s Sanctum, where jumping from levitating turtle-shell to turtle-shell and grotesque lamprey-men, this is a cool start – I was particularly enjoying the notion of finding jelly-fish diving suits – for the PCs will have to dive into a lake that doubles as a giant hammer-head’s hunting ground to extract a mythic horn from a giant clam shell.

And yes, fighting underwater rules are provided. Indeed, this is one aspect of The Sea Queen Escapes that deserves applause: None of the encounters throughout the locations within are boring or even mediocre – there’s something special going on in each of the rooms, with unique chests, terrain features and hazards providing, as a whole, a sense of a neatly-structured, thoroughly detailed and creative adventure. In a way, it is the inverse of the author’s Stonehell mega-dungeon, which I love for its own merits: If you’re familiar with that one, picture this module as featuring unique terrain features and treasure for pretty much everything.

The sanctum deserves another shout-out for a practice I really loved: You see, the adventure, as noted, has two handouts, right? Well, on each, we can see strange drawings and scenes, which can provide cryptic clues – and make sure that the story starts making sense in hindsight. The scenes do not act as spoilers per se, but cautious players may well derive information from them. Getting the balancing act between too cryptic and exposition dump by another means right is one of the impressive aspects of this adventure.

Speaking of impressive: Turns out that Shadankin had a compact with an entity most potent – blowing the horn summons mighty Tudines, a colossal turtle of island-plus-size, but only once every 3 years – so the PCs better make sure their sojourn into the second of the dungeon locales, which is a sealed complex within the inside of the turtle’s shell, matters. The vault of the turtle is the most linear of the dungeons contained in this adventure, and it makes sense – after all, this place is intended as one o safe-keeping. Giant anemones and box jellyfish acting as deadly treasure chests of sorts may be encountered here – and a warning spells doom for the PCs. Indeed, pillaging the vault will incur the sea curse – a switching of minds that is represented in real life by character sheets being cycled. (And if only one PC fails, an alternative is provided.) I really enjoyed this, as, much like a lot in this module, it is systematically designed to generate an experience that emphasizes player skill over that of the character.

Anyhow, with the key from the turtle’s vault in hand, the PCs make off towards the final small dungeon herein, which is situated upon the isle of Lone Ait – a forlorn place, trapezoidal, and wrecked by the forces of nature; the water surrounding the place tainted with oil and tar-like slick. Indeed, in a nice twist on the traditional elemental oppositions, we have an earth-themed dungeon here, with glowing amber spheres, tether balls that may be used by mighty fighter and the like awaiting – the guardians left here, from living tar to special, strange lizards, are not to be trifled with, and a final warning also is left – but in that final room, the sea queen and her handmaidens, gorgeous and in stasis, await. Freeing them, alas, will have them attack as soon as they’re out of immediate danger – turning into the monsters so aptly-depicted on the gorgeous cover. You see, Shadankin and Cealheewhalool once were lovers, and both adepts to the dark and unreliable arts of sorcery; Cealheewhalool was corrupted through and through, while Shadankin was not – thus, he imprisoned his lover, looking for a means to undo the calamity that had befallen his sea-queen. He never returned.

Thus, the queen of sunken Ru languished, until the wards started to fail, initiating the sequence of events depicted in this adventure. Defeating her will make the PCs friends of the sunken nation of Ru, which is depicted in an appendix of sorts, including hex map and currents – while I adore the depiction of the latter on the hex-map, this section also made me cognizant of a few shortcomings – for one, the currents should have strong mechanical repercussions, and the module could have been so much cooler with a bit more underwater action, particularly one enhanced by such cool ideas.

Editing and formatting are very good on a formal and rules-language level. Layout adheres to Goodman Games’ two-column b/w-standard, with the b/w-artworks as fantastic pieces throughout; the handouts in particular are great, and the maps are awesome; alas, no player-friendly versions are provided for the maps.

I am a pretty big fan of Michael Curtis’ writing – from his Stonehell mega-dungeon to his more well-known work for Goodman games, he knows what he is doing. In The Sea Queen Escapes, I was particularly enraptured by the strength of each of the dungeon-complexes – they all make sense from an in-game point of view, they all have distinct, yet linked themes, and there is not a single boring room to be found herein. And yet, I couldn’t help but feel slightly disappointed by the adventure. It took me a long time to properly enunciate why that is. I loved pretty much everything, so why didn’t this click in the same way as “Blades Against Death”, for example? In the end, my response has to boil down to one word: Scope. While more actual underwater action would have been nice, I did not expect that, and the module doesn’t need it to be a great experience.

At the same time, I couldn’t help but feel that all of the 3 complexes would have simply deserved more room to shine. All complexes are strong and jam-packed with ideas, generating a sense of a highlight-reel; however, they are done very quickly. They don’t have much time to fully develop their themes and atmosphere, teach the PCs and players their unique traits – they happen, awe your players, and then they’re already over. This is nothing bad per se, and for e.g. a convention, you’ll be hard-pressed to find better modules to drive home the weird/metal-fantasy aspect of DCC. This notwithstanding, with a few more pages, a few more rooms per complex, this could have been a milestone for the ages. As presented, we “only” have a pretty darn good module, bordering on excellence, but not wholly reaching it. As such, my final verdict will clock in at 4.5 stars, rounded down for the purpose of this platform.

The Sea Queen Escapes is available from DriveThruRPG.

The Genius Guide to the Riven Mage