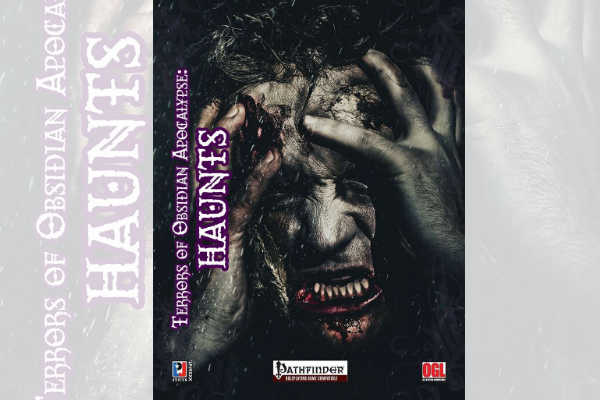 Terrors of Obsidian Apocalypse – Haunts provides a collection of haunts, obviously, one ranging from CR 1 to CR 10. The respective haunts follow a nice formatting, with CL, XP-values, CRs etc. being provided alongside a short flavor-text and, obviously, triggers, hp and all required pieces of information.

Now haunts constitute one of my favorite innovations that came out of Pathfinder, as a franchise, not as a system – I’ll always fondly remember entering Foxglove manor for the first time, with downright brilliant spooks that still are fondly talked about – Richard Pett’s inclusion of them and their subsequent way into PFRPG 4 APs later has been a continuous source of joy for the horror-aficionado, though I sure wished more rules actually properly interacted with them. That being said, this is not what makes them awesome – in my book, haunts are great because their visions, their effects, are an exciting way for indirect storytelling, a perfect way to slowly unearth more and more weird pieces of knowledge and flavor while also challenging your PCs.

When Rite Publishing started stacking them upon another, I was ecstatic and to this day, I have used them in various ways. The haunts herein do also sport some of these narrative peculiarities, though admittedly, since they’re not tied to a concrete adventure, the ties themselves are obviously less pronounced. But are they still interesting? Well, let’s take a look at the very first one, Bell Tower – when a bell ringer fell to his death, he wished he didn’t. So once your PCs try scaling the tower, he’ll fall past them…and then, fall back up, in reverse, accompanied by a potentially lethal reverse gravity effect. The latter is btw. not properly italicized.

Sickening roots of corrupted, dead trees wriggling from the ground, grease-duplicating ectoplasms goo, a cursed door, mists trying to dissolve you – the variability and imagery evoked skirts the line between being easily plugged in and being too generic, rendering them per se memorable, while still maintaining an interesting set-up. There also would be a library that blinds those seeking the knowledge contained within, Project Zero/Fatal Frame-style hangman’s ropes falling from the ceiling (that don’t actually kill the character, but don’t tell that your players!), defeated elementals still seething with rage, graves wherein skeletal hands may pierce and destroy you…quite a few nice images here. What about a ghostly mother, emitting deadly, ear-piercing screams?

Obviously, haunts are also defined by their means of destruction and whether halfway creative and competent players can deduce on how to put them to rest once and for all -and here, this rather ephemeral quality has been fulfilled. The respective means can universally be deduced by competent players.

Editing and formatting are good – while not perfect, most of the entries get everything right – kudos! Layout adheres to LPJr Design’s beautiful two-column full-color standard with GORGEOUS pieces of full color artwork provided.  In spite of the pdf’s brevity, it comes fully bookmarked with CRs included in the bookmarks – nice! The pdf comes with a smaller version in full-color intended for hand-held devices etc.

Wojciech Gruchala delivers an intriguing, nice array of haunts, with unique imagery, easy plug-in capacity and over all, a solid diversity of effects. Now, as always, I do have some nitpicks – for my own tastes, there are more spell-duplicating haunts when I prefer unique effects. At the same time, the imagery accompanying them is nice and unique. I was also a bit surprised to see this branded as Obsidian Apocalypse, when, bar a subtle theme, this does not tie in with unique subsystems featured in that book – essentially, this works perfectly in vanilla PFRPG. Note that I do not consider this a positive factor or a detriment, just something I observed.

In the end, this is a nice collection of haunts for a low price-point – it quotes some classic tropes in nice ways and can be considered a solid offering indeed, though one that falls slightly short of being truly brilliant. What we have here is an inexpensive, nice pdf – well worth a final verdict of 4 stars.

Terrors of Obsidian Apocalypse – Haunts is available from DriveThruRPG.

When the Ship Goes Down

Social skills – Are gaming geeks as bad as they say we are?