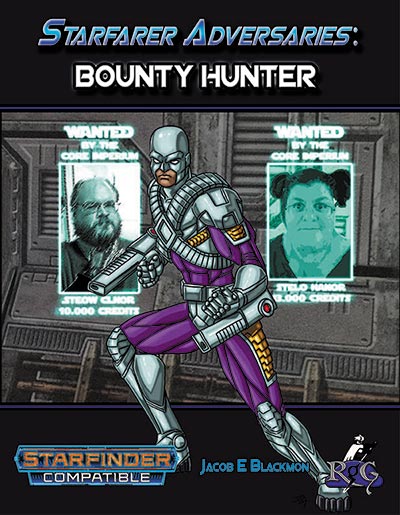 The bounty hunter herein comes in three iterations, all of which are human soldiers – the rookie (CR 4), the regular one (CR 8) and the veteran (CR 12). The builds make use of the Spell Bane feat and the bounty hunter theme; the latter being a welcome, if unusual deviation from the straight application of class grafts here, as far as I’m concerned.

The builds seem to be missing the -2 adjustment to Reflex save mandated by the class graft, though. As far as fighting styles are concerned, we have the bombard here, and grenade expert noted separately. As an early offering, there are some deviations in the notation of statblocks here – damage, for example, is not abbreviated, but instead lists e.g. “piercing” fully, and the formatting of grenades does differ from the one used in e.g. the Alien Archives. Interesting, if not correctly formatted – the builds use entangling weapon fusions for grenades. Similarly, the fly speed the two more potent builds receive should note that it’s derived from a jetpack.

Editing is very good on a formal, and good on a rules-language level; as far as formatting is concerned, we have quite a few deviations from the standard. Layout adheres to the series’ two-column full-color standard, and the artwork provided is rather charmingly reminiscent of silver age comic book books. The pdf has no bookmarks, but needs none at this length.

Jacob Blackmon nets a couple of solid and usable, if not perfect soldier statblocks here. Very much an NPC Codex-style offering, they provide some rank-and-file fodder for your PCs to struggle against. All in all, a decent, if not mind-blowing offering. The installment covering Thugs was much better and offered more. My final verdict will clock in at 2.5 stars, rounded up due to in dubio pro reo.

The Secrets of Tactical Archetypes

Party of 1 – Kalgor Bloodhammer and the Ghouls through the Breach