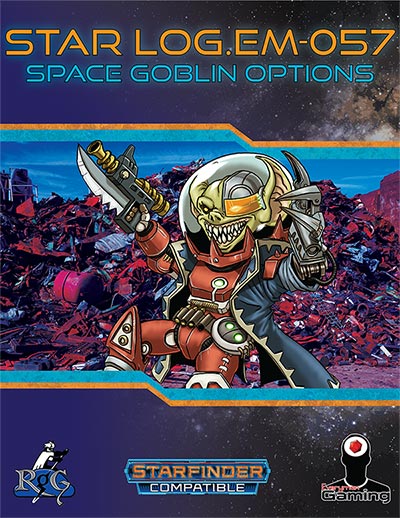 After a brief, flavorful introduction to space goblins within the context of the Xa-Osoro system, Star Log.EM – Space Goblin Options kicks off with the Best-Gob paragon archetype, which requires, obviously, that the character in question is a space goblin. This archetype nets the best-gob Skill Focus with Engineering at 2nd level as an alternate class feature. At 11th level and every 4 levels thereafter, the insight bonus increases by 1. Additionally, at 4th, 6th, 12th and 19th level, you may take any feat with the goblinoid subtype as a prerequisite as a replacement class feature bonus feat.

The pdf also presents 12 new feats (which will probably bring a smile to plenty of PFRPG-veterans):

Editing and formatting are good on a rules-language and formal level, and the pdf comes with a nice artwork. Layout adheres to the series’ two-column full-color standard, and the pdf has no bookmarks, but needs none at this length.

Jacob McKiernan’s space goblin options are interesting, ranging from the very clever to the slightly less exciting – the material basically takes old PFRPG material and re-contextualizes it. All in all, I consider this to be a nice expansion for space goblin fans, but wasn’t too impressed with quite a few of the feats within. My final verdict will be 3.5 stars, rounded down for the purpose of this platform – recommended if you were a fan of PFRPG’s goblins, but otherwise, not the strongest offering in the product line.

101 Not So Random Encounters: Winter