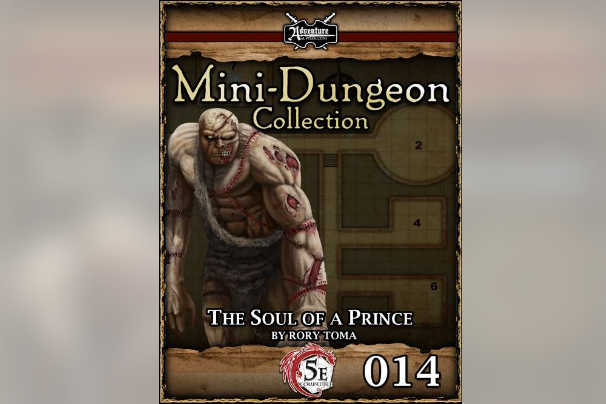 This means we get 2 pages content, including a solid map and all item/monster-stats hyperlinked and thus, absent from the pdf, with only deviations from the statblocks being noted for the GM. Unlike most 5E Mini-Dungeons, The Soul of a Prince does not come with VTT-maps or player-friendly iterations, which is a bit of a bummer.

Since this product line’s goal is providing short diversions, side-quest dungeons etc., I will not expect mind-shattering revelations, massive plots or particularly smart or detailed depictions, instead tackling the line for what it is. Got that? Great!

So, prince Remlek’s soul has been hijacked – the PCs are sent to retrieve it. It is in the claws of a devourer trapped in a complex under the city’s sewers and it can’t escape the complex. No one knows the soul is in the hands of a nigh hag, but the crafty creature has established defenses to lure more powerful souls to activate the escape portal. Okay, if this sounds a bit confused, then because the introduction is just that – how do the authorities know where the soul is, but not that it’s in the claws of a night hag?

The complex is brutal: There is a chamber that sports a circle that continues to summon wraiths. Without hallow, the circle can’t be destroyed. Spell not available/prepared? No divine caster with the spell? Tough luck – your module has just gone from hard to insane in difficulty – and that is provided your players guess that they are supposed to cast the spell. There is RAW no means to find that out within the module. Worse, in subsequent rooms, we have HEZROUS summoned. While these guys are no longer as bad as in D&D 3.X, that’s insane – particularly considering the lack of means to find out what you’re supposed to do. Worse, this is billed for characters level 9 – 11. Guess how many hallows you’ll usually have at 9th level? Bingo. ONE. Have fun with infinite respawning foes.

There also is a “puzzle” that boils down to “roll a skill-check,” with the ticking timer of the aforementioned constant summonings rendering the whole thing potentially super-lethal.

Editing and formatting are very good, I noticed no significant hiccups. Layout adheres to a nice 2-column full-color standard and the pdf comes sans bookmarks, but needs none at this length. Cartography is full color and surprisingly good for such an inexpensive pdf, but there is no key-less version of the map to print out and hand to your players. Stats, as mentioned above, obviously are hyperlinked to the SRD.

This, in its PFRPG-version, was one of the most confused and BAD modules in the whole series – and good things first: The 5E-version is actually better than the PFRPG-trainwreck. Rory Toma’s Soul of a Prince, however, is still a middle finger to the players. No means to decipher the means to eliminate the constant summoning, a flimsy lead-in that doesn’t hold up to rudimentary scrutiny…etc. In short, this is not a good module. If you don’t have at least 2 hallows and a character that can reliably meet high Intelligence (Arcana) checks (the only skill this module requires, btw., don’t try. I’d strongly suggest going for one of the many, many better modules in the series. My final verdict will clock in at 2 stars.

5E Mini-Dungeon #014: The Soul of a Prince is available from DriveThruRPG.

Advanced Feats – Secrets of the Alchemist

Faces of the Tarnished Souk–Arhanoth, the Iron Gavel