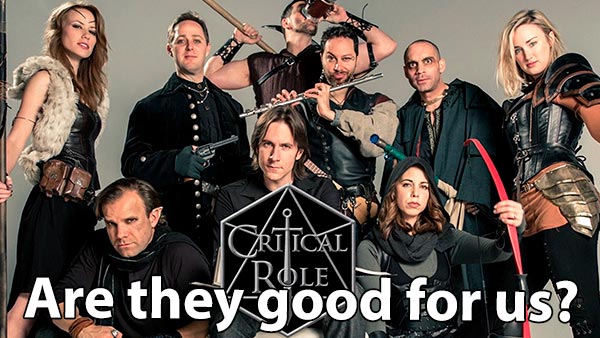 Critical Role has been going for a number of years now and its presence has had a tremendous impact on the hobby. But, why do some people think this is bad?

Well… I tell you all about it in the video.

The role of Critical Role in the hobby is getting stronger by the season. What started as a bunch of professional voice-over actors having a go at doing some fun stuff on camera that they would normally do in private has turned into a multi-million making machine that has managed to fund their own animated series in Kickstarter.

And yet there are those who think that they might not be as good an influence as we might want to believe.

The Matt Mercer led team has managed to gather thousands of hours of views, published their own books and adventures, updated their premises from something “nice” to something “fantastic” and is, probably, the best known show out there.

A team that counts with the likes of Marisha ray, Travis Willingham, Liam O’Brien, Sam Riegel, Felicia Day (as a guest), Ashley Johnson, Taliesin Jaffe, Laura Bailey and Will Friedle couldn’t possibly do wrong. The mettle of any of them can be easy measured and every one of them lives up to expectations and that, some think, make people believe this is what RPGs are like for the average player.

More than one Mercer has had to come to Twitter to defend that the way they play D&D in Critical Role is just their way of playing, and his way of directing the game is his way. That there is not ONE way to play and people should just take the show for what it is: entertainment, not statement.

Do they really make everything look so perfect that people will be disappointed?

Personally I think we need a great deal more shows like this, but then, if you have watched the video, you already know!