Knee Jerk, an upcoming game by Knapsack Games is described as “The party game of instant reactions!”

I have to say I found that slogan to be rather uninspiring. Party games that require instant reactions are ten a penny (or a dime… or whatever currency you like), so another one didn’t really inspire me.

Then I read the rules: A moderator player lays three cards on the table. They will form a sentence. The first person to finish that sentence (hopefully with something funny) wins the point. The next player becomes the moderator. Another card is laid on the table and the process is repeated.

Uhmm… It really didn’t grab me. At all. Based on that, this is a game that shouldn’t work.

You see, doing “funny” in games is not easy. Sense of humour is such a subjective thing, that doing something that will be funny for everyone is extremely difficult. So I wasn’t hopeful at all.

But then we started to play the game and my scepticism vanished. Didn’t’ take more than a couple of rounds, to be honest.

The game, which will be funded in Kickstarter, it’s basically a deck of cards. I don’t know what the final result of the game will be, but the prototype I have is produced by The Game Crafter and it is pretty good quality (which is what we’ve come to expect from them). If the final product is as good as this, I’d be happy.

The graphic design in the cards is superb. Each card has three sentences inside a shape of different colours that turn into arrows when lined up with another card. The first sentence is a consequence (I feel my stomach rumbling), the second is a situation or place (On my honeymoon) and the last one is the reason to the first arrow (Because I figured out…)

Everytime you lay three cards you get three different situations with different consequences and different reasons. All the cards can be used with any other card and thus the combinations are pretty much endless. And wacky… really,really wacky!

Knee Jerk does humour very well indeed, I have to say. If you look at the cards individually, they mean very little, but when you start to put them all together, the sheer silliness of the situations will leave you laughing.

By now a lot of you will have thought of “Cards Against Humanity” as being a similar game. And you’re right, this game plays similar, but it’s not the same… not by a long shot.

Whereas the sense of humour in CAH is rather inappropriate, in Knee Jerk it doesn’t have to be.

Please note I say “it doesn’t have to be.” It can be, but this game is safe for kids and any inappropriate outcome is down to the players, not to the game.

For example there are situations or reasons that could inspire a less than appropriate response. “In the hot tub”, “because an Old Man Said…”, “Because I Felt Someone…”, “Because Someone Showed me…”

Some of those will inevitably inspire something naughty. But it does that, inspire it. It’s down to the players to say something naughty and when playing with children the sentences by themselves are pretty innocuous.

And this is what this game does so well. It leaves enough to the player’s imagination to become raunchy if that’s what you’re after, and it leaves plenty of room for innocent fun with silly situations so the whole family can enjoy the game.

This game is very well worth having, I think. It should do very well in Kickstarter and it’s a really good family game that can be played anywhere, be as silly as you like and provide a huge amount of fun to both adults and children alike.

I was won over after my initial cynicism, and I’m really glad I was. Now I have a silly/naughty game I can bring out with pretty much any of my friends that will live up to the expectation of pretty much any group. 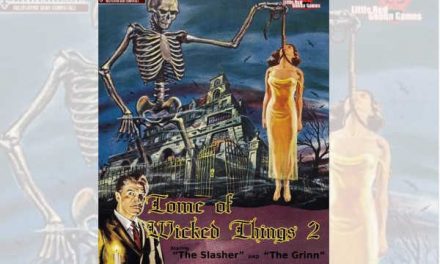